By Santino Andry and Angelo Andrianiaina 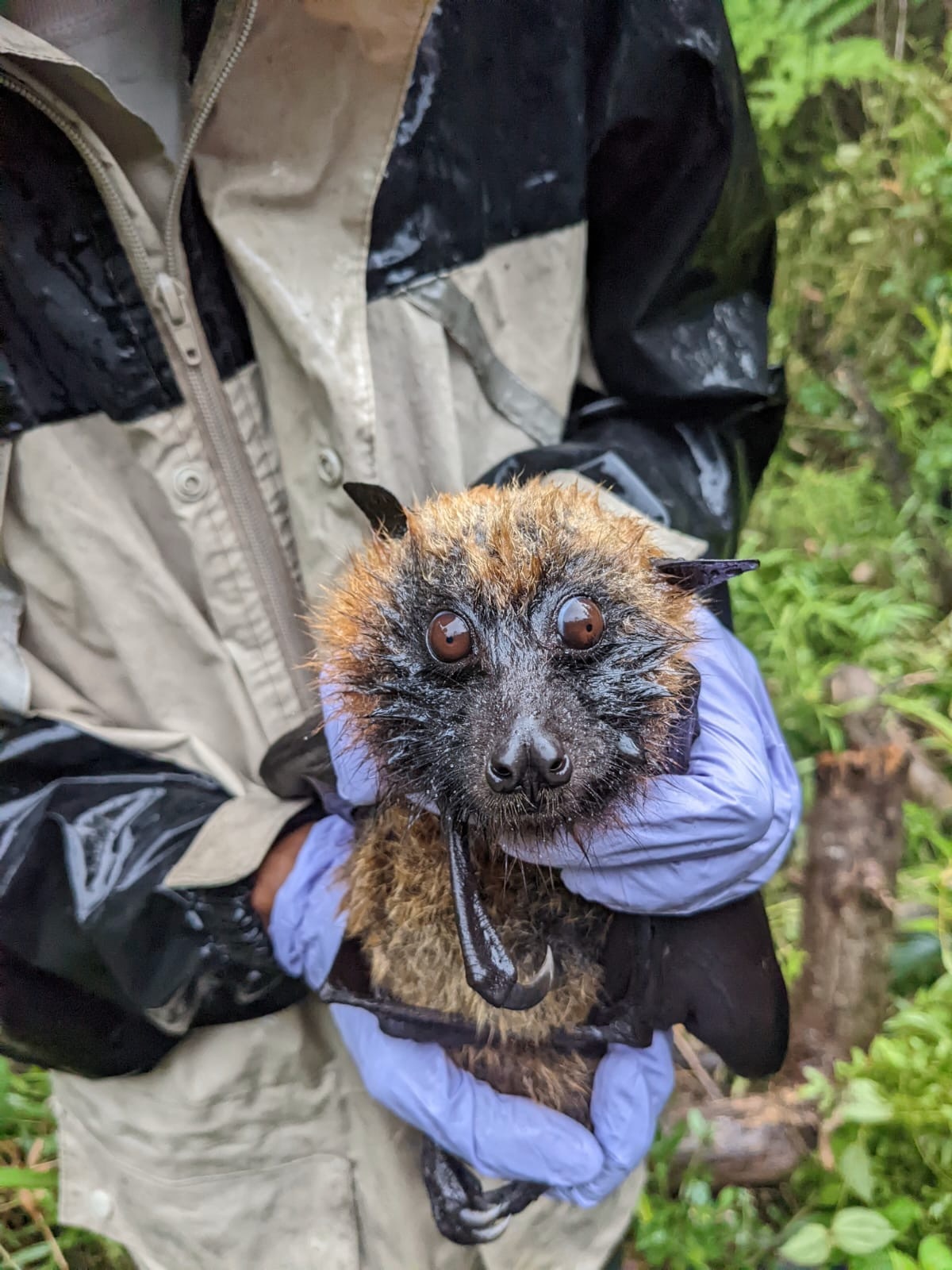 This post commemorates the publication of our new paper, ‘Reproduction, seasonal morphology, and juvenile growth in three Malagasy fruit bats’, out today in the Journal of Mammalogy.

The Old World Fruit Bat family Pteropodidae is the most endangered group of mammals on earth. Around 35% of the pteropodid species are classified under some category of threat on the IUCN Red List.

Madagascar is home to three endemic fruit bats in the family Pteropodidae: Pteropus rufus, Eidolon dupreanum, and Rousettus madagascariensis. Malagasy fruit bats are facing intense population pressure due to heavy hunting for human consumption and habitat loss from land conversion. Both P. rufus and E. dupreanum are classed as ‘Vulnerable’ on the IUCN Red List and R. madagascariensis as ‘Near Threatened.’ This situation is alarming because the information concerning the life history traits of the Malagasy bats is scarce, making it challenging to project population viability into the future.


In our new paper, we quantify life history traits, such as the reproductive period and juvenile growth rate, for these three species. Quantifying this information will be necessary to future efforts to estimate the population viability of these Malagasy fruit bats, as well as to understand their role in maintaining potentially zoonotic viral pathogens.

In our paper, we quantify the reproductive period for all three Malagasy fruit bats, predicting gestation spanning from April through September for P. rufus, July through October for E. dupreanum, and August through November for R. madagascariensis in the Moramanga District of central Madagascar. Consistent with previous reports from other frugivores (e.g. lemurs) in Madagascar, we find that all three bats wean their young simultaneously, at the height of the fruit season in late January/early February. We note that we observed the longest period for gestation and lactation for the largest of the three fruit bat species, P.rufus, which is the species most threatened by human hunting. This species also had the most protracted juvenile growth period, so–all in all–the longest period under the most vulnerable life history conditions. 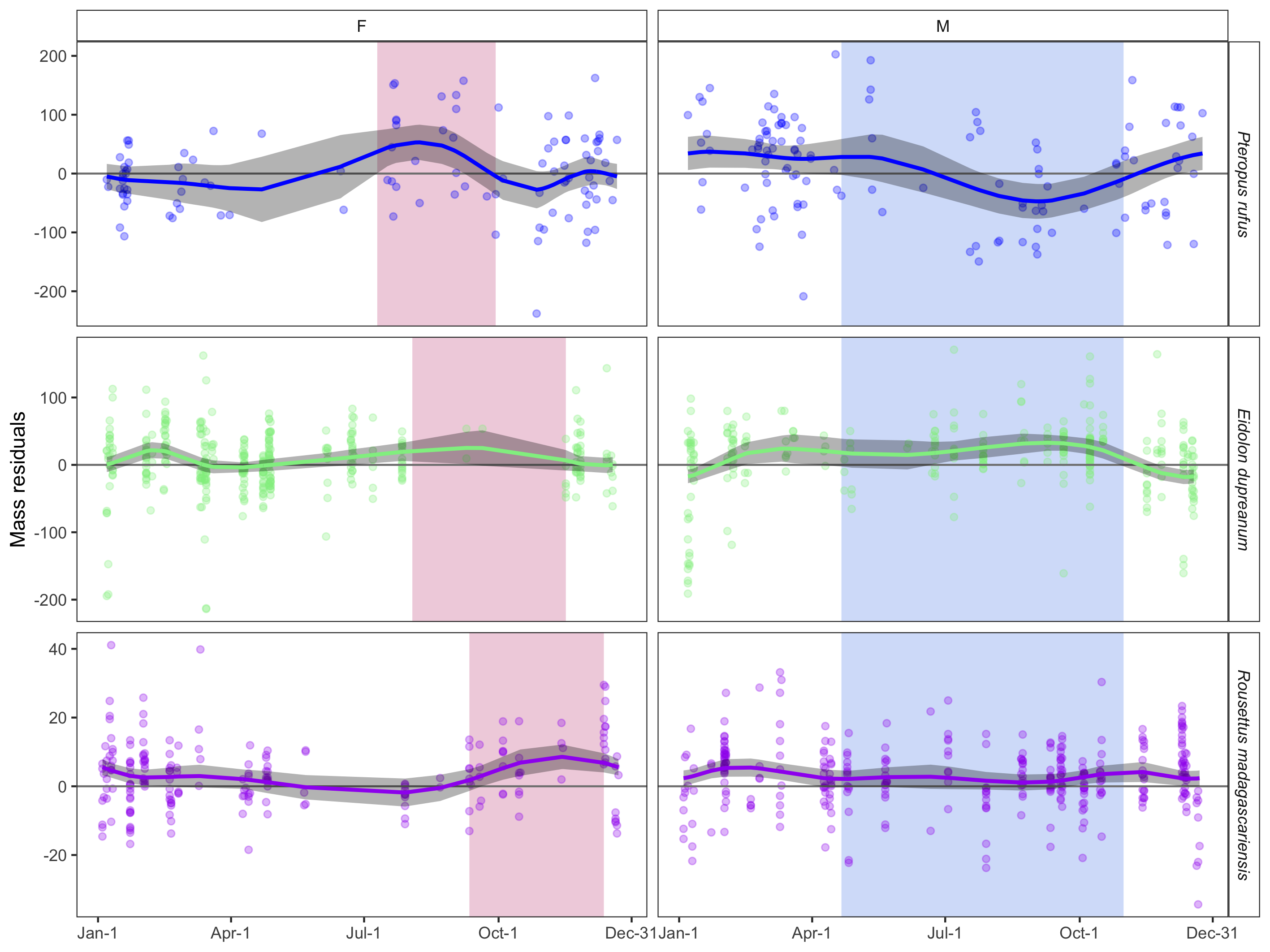 We also demonstrated that mass and forearm length are positively correlated for adult fruit bats, but that residuals above and below the regression line can be be used to approximate a bat’s “health”. This mass : forearm residual functions like a ‘body mass index’ for a bat. We showed how this ‘bat BMI’ dips for males during the winter (low fruit) season and increases during the summer (high fruit) season. For females, these data are confounded by the effect of pregnancy - we can see how these residuals increase during the gestation period for female bats, staggered across all three species. Quantification of the duration of this staggered gestation period is important for pinpointing the season when these bats are most vulnerable to human hunting–as well as when humans are most at risk for the spillover of bat-borne viruses, known to be shed intensively under reproductive stress.

In future work, our lab is using hormonal assays of female progesterone and estradiol and male testosterone, to more concretely quantify the limits of these reproductive periods.